Home>Stroke control using for example a compressible material. Compressed up to the compressibility limit.

Besides a procedure of regular building-up of the pressing force after the pressing plates are getting in contact, in some special cases there is need of driving a certain stroke distance control by using a laboratory press.

An example of such an application by using any stroke control system is any kind of (hot) embossing task. The convergence process before getting in contact seems to be important.

This convergence is intended to take place in a certain way right BEFORE the pressing force itself is being built up. Here important could be the stroke speed of the pressing platens on their way to get in full contact. Imagine loose mats or wood chips or a sponge as an example material.

The certain task of our customer consisted of a micro embossing sample to be produced with a very special geometry in the plastic surface of the sample.

As a result, the well-known lotus effect should be aimed on the surface. By using a prepared micro press punch, fine hemispheres (outwardly protruding bulges) were embossed into a plastic surface under the influence of temperature. This lead to the desired optimal perfect embossing result by means of the extremely slow convergence control feature.

A stroke control is used in cases that any predefined approach positions (like as “floors”) comparable to an “elevator” are meant to be driven. 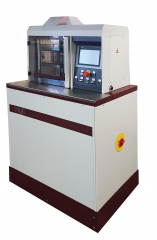 This laboratory press is an all-rounder and as stand-alone model suitable for many tasks and laboratory applications!

We will gladly advise you by a first and noncommittal informative contact on the phone for clarifying the question whether and how we might cope with your specific applications.

A considerable number of well known companies of the major league players of the chemical industry have been for more than 20 years our satisfied customers. In case of specific requests, please ask for our complete list of references.

Our machinery as basis for your customer specific individual solution

We are looking forward to get to know your customer specific requirements and requests, for which we will be glad to find, together with you, a solution. You will profit by our experience.
This website uses Cookies. By using the website and its offers and continued navigating, you will accept these Cookies. This you may change in your browser settings. To the privacy statement